We use cookies to improve your experience. Cookie Declaration
ACCEPT ALL
TWCHE Support Ukraine With Swiss Red Cross.Learn more

What is the Bitcoin Blockchain: Ultimate Guide 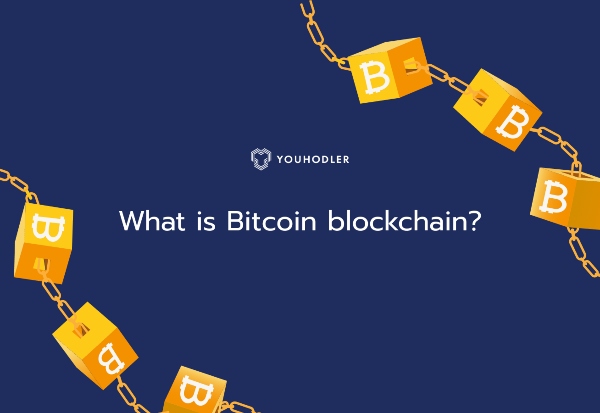 Did you know that over 106 million people worldwide now use cryptocurrency? The most popular of them all is bitcoin! Understanding blockchains and how bitcoin works are the first essential steps to starting your journey in cryptocurrency. You have probably heard of confusing terms like ‘blockchains’, ‘cryptography’, ‘bitcoin mining’, and ‘decentralized crypto exchanges’.

Cryptocurrency can be intimidating to get into, and a lack of knowledge might be hindering your motivation to get into bitcoin trading or mining. We compiled all the most crucial information you need to know into one, easy-to-read guide. Welcome to the ultimate resource for bitcoin beginners. Today, we will explore what the bitcoin blockchain is and how it works.

What is the blockchain?

The blockchain is a public database distributed through online networks. It was first proposed as a research project in 1991. Think of it like a ledger that stores a constantly-updating record of every bitcoin transaction. When someone exchanges bitcoin, it is going from one person’s anonymous virtual wallet to another’s.

Unlike a normal database, the blockchain records its data in a different structure. Instead of submitting individual entries into a table format, data is collected and saved in groups, also called blocks.

What is a block?

To answer ‘What is the blockchain’, you need to know what blocks are. Blocks are interconnected and contain information. Hence, forming a chain of blocks – or a “blockchain.”. A blockchain stores all kinds of information. Making them great for smart contracts, non-fungible tokens (NFTs), and a variety of other use cases.

The information stored in these blocks includes the digital address of bitcoin wallets and the exact timestamp of the transaction. Bitcoin miners verify and publish the blocks. Then they are ‘stacked’ onto each other to form a new blockchain part. Once bitcoin miners deem it a safe and valid transaction, the new bitcoin block is transferred. Finally, it's recorded into the ledger for all to see.

Now that you understand what a blockchain is, let’s look at how bitcoin uses the blockchain to function. What is bitcoin? You can probably define it as a cryptocurrency, a virtual form of payment, or as one of the most well-known kinds of financial technology.

Bitcoin.org describes bitcoin in their 2008 white paper as a ‘Peer-to-Peer Electronic Cash System’ and as a ‘chain of digital signatures. Rather than an actual digital image of a coin that you can save or spend online, bitcoin is a block of data all wrapped up in encrypted code.

We know that blockchains are used for other cryptocurrencies too, though. What makes bitcoin different is the cryptography and network system used. This is where the ‘crypto’ in cryptocurrency comes from. Cryptography translates to ‘’secret language’’.

The bitcoin blockchain uses three kinds of cryptography methods to keep the currency safe and effective use. They are:

This algorithm encrypts the data with a 256-bit hexadecimal number that contains all of the information linked to the blocks previously connected to the chain. This means that the block is tracked and verified through the number.

This cryptography uses a secret methodology to encrypt raw messages. For example, if you wanted to send secret messages, you could encrypt the entire alphabet by correlating each letter to a number (A = 1, B = 2, etc.). Unless someone knows what the key is to solve the message, no one would be able to read the message.

Unlike symmetric encryption, which uses one key to encrypt a message, this method uses two keys. In the bitcoin blockchain, there are public and private keys. These create many more encryption variations.

This also enables a special feature. As “Person A” sends  “Person B” a bitcoin, they can use the public key to encrypt a message that can only be decrypted by “Person B’s” private key.

These three methods of cryptography ensure that a bitcoin’s data is kept safe, private, and most importantly authentic. Remember how bitcoin was called a ‘chain of digital signatures?’. The signatures have to be verifiable by others, counterfeit-proof and secure from reneging after commitment.

This is because a transfer of bitcoin works similarly to a contract. Once it is signed, the other party must verify the signature. They must also make sure that it has not been forged by someone other than yourself. Lastly, they need to know for certain that you won’t be able to retract or erase your signature and demand your property back after they have already paid you for it.

What is the Bitcoin blockchain?

One of the most appealing characteristics of the blockchain is that it is decentralized from the control of any government or bank. While transactions are recorded, they aren’t linked to anyone’s real identity. So, imagine you have just mined a new bitcoin and added it to the blockchain - your name, address, and any other identifiers would not be recorded in any way.

Where is the blockchain kept, though? Since it isn’t being monitored or stored by a central authority, you might be wondering if there are any potential drawbacks to not doing so. The blockchain is stored on nodes, which are servers that are connected through a network.

If one server is corrupted, destroyed, or altered, the other servers cross-reference each other and ensure that the blockchain’s information is correct. Once a block is added, the change is irreversible - it can never be deleted or tampered with. This means that the blockchain is publicly distributed for all to check. You can easily browse the blockchain here: https://www.blockchain.com/explorer

You might have heard of hackers exposing bitcoin exchanges. How can a hacker expose a public database? It’s a good question, and the answer is encryption. Users’ private key represents ownership of bitcoin. A hacker could potentially steal this information and claim ownership of the bitcoin, as well as exchange it with other people.

Having the bitcoin system in place helps prevent this from happening, although there is always a risk. The node network constantly checks that information from old and new blocks is correct and secure, taking away the need for a central authority to scan for fraud.

What Is Bitcoin Mining?

Bitcoin mining is one way to increase the number of bitcoin you own. The other is, of course, to purchase them from others. Mining bitcoin can also be called validating new bitcoin blocks. The first bitcoin was mined in 2009, shortly after bitcoin was launched. What does bitcoin mining mean?

When you mine for diamonds, you have to carefully chip away at the earth they are buried in. Bitcoin blocks that have not been published and added to the blockchain are hidden behind mathematical puzzles that are difficult to solve, even for a computer. Remember the hashing algorithm that creates a 256-bit hexadecimal number for each block? That is the puzzle the computers need to solve by finding the right 64-digit number.

Imagine asking a friend to guess a number between one and ten. If they guess the right number, they get a prize. At most, they would need ten guesses to win. Now imagine they had to guess a number between one and one million. It would probably take a little longer for them to guess correctly. The current likelihood of correctly guessing a bitcoin block hash in one go is about one in 30 trillion.

Special hardware and software are necessary to chip away at these hashes, as it takes hours or even days to solve them (depending on how much machinery you have). Once the puzzle is solved, the bitcoin block is uncovered and the transaction information is verified by the node system.

The reason for halving the value of the block about every four years is to keep the incentive high and the cryptocurrency economy stable. There are more people mining bitcoin now than ever, so it is important not to saturate the market.

How Do I Mine Bitcoin?

Though it is possible to mine bitcoin alone, it is very difficult. Many people join mining pools, which are groups of miners who combine resources and split profits. There are three crucial components to begin mining for bitcoin blocks. They are:

Your machinery must be running for the entire duration of solving the hash and verifying the block transaction.

Your internet speed is not that important, although it can cause some delays. H The most important reason to have the internet is so you can be connected to the bitcoin network and other bitcoin miners (if you are in a mining pool) 24/7, without any interruptions.

Unfortunately, you can’t use a normal laptop or desktop computer and system to mine for bitcoin. They simply aren’t efficient enough to handle the task. You will need an application-specific integrated chip (ASIC) system that is customized for mining. These can cost $4000 minimum and will be more expensive as the demand rises. Still, just one of these ASIC set-ups is not likely to reward you with even one bitcoin block. This is why bitcoin mining farms or pools are much more popular. The system combined with Internet and electricity costs is expensive depending on your location.

How to spend your bitcoin

However, it is important to note you don’t have to buy 1 whole Bitcoin. To make spending BTC more effective, one bitcoin can be split into one millionth, called a satoshi. Using a cryptocurrency wallet, you can split your bitcoin into smaller units and send them to others. That means you can buy just $10 worth of Bitcoin if you want.

Many major companies now accept BTC as a valid form of payment, and crypto credit cards are now partnering with MasterCard and Visa. While you spend bitcoin through the card, the retailer automatically receives government-issued money in their account.

More people are opening up to using cryptocurrency. From luxury jewelry brands to tech start-ups, cryptocurrency is now a larger part of the worldwide market. However, you can also use third-party exchange brokers to convert your bitcoin into cash. You can also use a peer-to-peer platform and convert your bitcoin into cash with another anonymous individual.

BITCOIN IS ON SALE. BUY NOW.
About the Author

Editor-in-Chief of the YouHodler blog. Connect with him about writing techniques, cryptocurrency, and music.

Read next
Bitcoin Fear and Greed Index: A Look into this Potential "FOMO Indicator"

Black Swan Theory: What is it and Why Does It Matter?
YouHodler vs Celsius Network: A Comprehensive Review
Crypto Valley Conference 2022: YouHodler Review
Crypto Watch: The Best Crypto to Invest in 2022
ALL POSTS

Products, services, information and/or materials contained herein may not be legally available for residents of certain jurisdictions such as USA, countries under embargoes or sanctions and/or other blacklisted countries. If such restrictions apply to you, you are prohibited from accessing the website and/or consume any services provided on this platform. You are requested to leave this website.